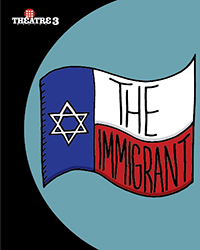 × The most widely produced play in the country in 1991, this play gently grapples with the thorny questions that plague the USA—who deserves to belong here and what do we owe each other? Set in Hamilton, Texas, The Immigrant tells the story of Russian-Jewish immigrant Haskell Harelik as he settles into America at the turn of the 20th century. Unable to speak English, the outsider pulls his banana cart through the staunch Christian community seeking shelter. Over a span of 30 years, this tiny town becomes the home for his young family as religion meets religion, culture meets culture, fear meets fear, and love meets love. Based on the life of the playwright’s grandfather, this play resonates deeply today, as immigration policies and anti-Semitic rhetoric embroil the globe in conflict.

In lieu of tickets, patrons will purchase access codes for streaming. Streaming is limited to 200 for each of the ten viewing opportunities (full schedule follows at bottom of press release). Consider each viewing opportunity as a performance that begins at the published time. Videos must be accessed within 30 minutes of the start times for each show. In addition to the streamed performance, viewers will be provided with a digital version of a traditional performance program. Plus, Theatre Three will host talkbacks on Facebook following the performances on June 15, June 21 and June 28